To share your memory on the wall of Annabelle Galang, sign in using one of the following options:

Print
Annabelle Alviz Galang was born in Manila, Philippines on July 26, 1960. She was the oldest of six children born to Ben Alviz and Flora Manzano.

Annabelle’s passion was in Arts. She enjoyed playing the piano and loved to draw and... Read More
Annabelle Alviz Galang was born in Manila, Philippines on July 26, 1960. She was the oldest of six children born to Ben Alviz and Flora Manzano.

Annabelle’s passion was in Arts. She enjoyed playing the piano and loved to draw and sketch. Her interest in playing the piano like her Mom motivated her to attend a year course in Music at the La Concordia College in 1977. Her passion for drawing and sketching people and fashion clothing led her to pursue her education in Fashion Design. She attended Cora Doloroso College and graduated in 1979.

Upon graduation, Annabelle worked as an Office Assistant in the Philippines before moving to America in 1985 where she was reunited with her parents and siblings (Jojo, Dolly, Ferdie, Leo and Richard) and lived in Van Nuys, CA.

Annabelle landed her first job in America at 3M as a Production Line Operator. She used to carpool with her friends Ana, Norma and Rick. This led allowed her to meet Rick’s brother, William Galang, who became the love of her life. They were married in 10/1990, with their marriage spanning more than 28 years.

Annabelle and William soon had 2 children, Matthew “Eo” was born in February 1991. A year later, Luke was born in September. They live in their loving home in Northridge, CA.

After 3M Company, Annabelle began working for St. Jude Medical Center in the production line making Pacemakers. During this time, her sister Dolly encouraged her to take some courses at Marinello School of Beauty to obtain certification for Esthetician, so she can come work with her at R&R Medical Wellness, a business Dolly owns. Because they became best friends since childhood and had a chance to work side by side in the last 3 years, their understanding of one another became deeper, and their sisterly bond became even closer where they thought of one another as not only sisters but also as best of best friends.

Though Annabelle was very shy, she made a lot of friends and was well loved by her family, friends and co-workers. All that met her will remember the positive impact she had on their lives.

Besides being very shy, Annabelle was also very religious and became a devout parishioner at Our Lady of Lourdes Catholic Church in Northridge. Her shyness did not stop her and even took a step further in the Church, as she became a Eucharistic Minister in 2011. She felt that this was a calling in life and served the church with passion.

Annabelle lived an honorable and purposeful life. She did not shy away from her responsibilities, her duties, and the difficulties she encountered on the path she had chosen for herself.

She left behind a loving husband and 2 children on January 9, 2019 at their home.

Annabelle made do with what she had and did what needed to be done. She lived in accordance with the way of the Lord.

May we all have such words spoken of us at our time of passing.
Read Less

To send flowers to the family or plant a tree in memory of Annabelle Alviz Galang, please visit our Heartfelt Sympathies Store.

Receive notifications about information and event scheduling for Annabelle

We encourage you to share your most beloved memories of Annabelle here, so that the family and other loved ones can always see it. You can upload cherished photographs, or share your favorite stories, and can even comment on those shared by others. 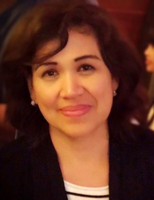