To share your memory on the wall of Deborah Dickson, sign in using one of the following options:

Print
On Monday, January 21, 2019, Deborah Lee Dickson, loving mother of two children and three grandchildren, was called home to the Lord at the age of 67.

Deborah was born on August 18, 1951 in San Francisco, CA to James and Virginia Dickson... Read More
On Monday, January 21, 2019, Deborah Lee Dickson, loving mother of two children and three grandchildren, was called home to the Lord at the age of 67.

Deborah was born on August 18, 1951 in San Francisco, CA to James and Virginia Dickson. While completing her AA she raised two sons, Wesley and Travis. Deborah worked as an optometrist technician for many years and then became a bank manager before her retirement.

Deborah’s life was not without tragedy, difficulty and hardship. She lost her brother in a tragic car accident in 1978, her father in 1986, and her mother in 1996. Through these difficult times, Deborah kept her faith in God within the Lutheran Church. Deborah was a very spiritual person and continued to go to the Lutheran Church.

Deborah was a free-spirited woman who loved butterflies. She loved them so much, she had a tattoo of one on her shoulder. Deborah felt that butterflies are deep and powerful representations of life and our souls. She saw the butterfly as a symbol of resurrection, so if you see one, that just might be Deborah greeting you. Deborah also loved the peace sign and had a tattoo of it on her wrist. Deborah and the butterfly both represent endurance, change, hope, and life. Deborah, her beloved Bichon Poodle, Milo, and sweetheart Parakeet, Bibi, are dancing in heaven smiling upon us!

Deborah also had a passion for music, poetry, movies, and her iPad games. She was an avid tea lover and a collector of Marilyn Monroe memorabilia. She was also obsessed with anything British. She was so excited to recently find out her DNA genetic testing had British ancestry and made certain to tell her family she knew she was British. Maybe this is why she loved to also do archery, but had to give it up due to arthritis in her hands. She was also known for her quick wit, her singing, and her kind, compassionate spirit. Her closest friends might not know she had an alter ego named, Toni. Toni would walk into a room and Caribbean Queen would play. She loved to play Texas Hold ‘em, drink wine, and had a cutthroat attitude when it came to playing any game. She loved to win!

Deborah was preceded in death by her father, James; her mother, Virginia; and brothers, Tilford, Robert, and Richard. She is survived by her two children, Wesley and Travis; her sister, Carol “Cookie”; brother, Scott; three grandchildren, Wesley, Akemi, and Kenji; and several nieces and nephews.
Read Less

To send flowers to the family or plant a tree in memory of Deborah Lee Dickson, please visit our Heartfelt Sympathies Store.

Receive notifications about information and event scheduling for Deborah

We encourage you to share your most beloved memories of Deborah here, so that the family and other loved ones can always see it. You can upload cherished photographs, or share your favorite stories, and can even comment on those shared by others. 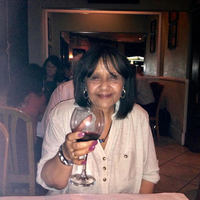