To share your memory on the wall of Manuel Salcido , sign in using one of the following options:

Print
Manuel Salcido, a native of the Santa Monica/Venice Beach area and a long-time resident of the San Fernando Valley, passed away peacefully on April 2, 2019 at the age of 84.

Throughout his life, Manuel was known for his incredibly strong... Read More
Manuel Salcido, a native of the Santa Monica/Venice Beach area and a long-time resident of the San Fernando Valley, passed away peacefully on April 2, 2019 at the age of 84.

Throughout his life, Manuel was known for his incredibly strong work ethic, his sharp sense of style and his smile that lit up a room. He encouraged each of his five children to be goal-oriented and he was always there to help them with homework and student council speeches, coach their basketball games or sponsor their little league baseball teams. Years later, he would help his grandchildren with their homework, watch their performances and softball games or take them to the beach during their summer break. Manuel loved music, especially Frank Sinatra, Poncho Sanchez and anything with a Latin flair. He was quite the dancer and him and his wife Yvonne performed their perfectly in sync swing dance for many family members and friends over the years. Whether it was a holiday, birthday, graduation or wedding, Manuel loved celebrations and his parties were legendary. He simply loved to entertain and the doors of the Salcido home were always open to everyone.

Manuel Ernest Salcido was born October 21, 1934 in Santa Monica, California, the eldest of five children raised by Cruz and Ruth Salcido. At the young age of nine, he happily took on two paper routes to help his parents put food on the table and he was very proud of his years as an Alter boy at the Catholic church he attended. On the weekends, he spent most of his time on the beach which was a playground for him and his buddies.

When he was in ninth grade at John Adams Junior High School, he met a girl named Yvonne Sena and was instantly smitten. He slept with her picture under his pillow and when he asked her to dance at a school event, she turned him down. They attended Santa Monica High School together and he went to her home and asked her Father if he could take her on a date and he said no. A few years after high school, Manuel joined the Air Force and spent time stationed in Barcelona, Spain. Not too long after his return to California, he ran into Yvonne Sena. The third time was the charm. Manuel and Yvonne eloped in Mexico on March 19, 1961 and were married for nearly 53 years before Yvonne passed away on March 12, 2014.

Manuel was highly ambitious and from his early days working at Campbell’s Men’s Store to helping open the first Hamburger Hamlet restaurant, he always strived for success in every job he had. Real estate was a centerpiece of his career and earning the “Million Dollar Salesman” award at the Forest E. Olsen Company was a true highlight. An entrepreneur at heart, he started his own real estate company in the 70s and felt “Salt” was more memorable than Salcido so Ernie Salt Realty was born. In the 90s and 2000s Manuel worked in the mortgage and banking businesses and he didn’t truly retire until he was close to 80 years old.

Throughout his life, Manuel was an optimist and his positive energy and charisma left an imprint on everyone who knew him.

To send flowers to the family or plant a tree in memory of Manuel E. Salcido , please visit our Heartfelt Sympathies Store.

Receive notifications about information and event scheduling for Manuel

We encourage you to share your most beloved memories of Manuel here, so that the family and other loved ones can always see it. You can upload cherished photographs, or share your favorite stories, and can even comment on those shared by others.

Marisa and Bill Stearns, Stephanie Luciano, and other have sent flowers to the family of Manuel E. Salcido .
Show you care by sending flowers

Posted Apr 08, 2019 at 01:57pm
Christy and the Salcido Family, Our thoughts and prayers are with you during this difficult time. Hugs and kisses. Marisa and Bill Stearns

Posted Apr 08, 2019 at 12:28pm
Wishing you peace to bring comfort, courage to face the days ahead and loving memories to forever hold in your hearts.

Posted Apr 08, 2019 at 10:25am
I first met Ernie around 1993 when, dressed in the most well-tailored suit and a striking tie, he visited the Ketchum office (then known as Braun-Ketchum) to take his daughter, Christy, to lunch. She was a rising star at the agency and he eagerly shook hands with all of her supervisors, clearly bursting with pride. As she rose through the organization and we became close friends, he would stop by the office regularly and I was lucky enough to join them for lunch on occasion. What always struck me, besides the ever-present twinkle in his eye, was his deep love for Christy. He would share business tips with us (we worked on the Great Western Bank business togetther and were always asking him about terminology, banking strategy, etc.) and we'd gossip about co-workers and clients. When she decided to transfer to the New York office, I was honored to be invited to the going away party at Yvonne and Ernie's home in the Valley. He and I stood in the kitchen and lamented about how much we were going to miss her but were also certain this was the right move for her (it was). I did see him one more time at Christy's wedding and even though it had been several years, he greeted me with such warmth, and wanted to know all about what I was up to, etc. What a delightful and charming man; the Salcido children, grandchildren and great-grandchildren are so lucky to have had him in their lives for so long. RIP to the lovely Manuel Ernie Salcido.
Comment Share
Share via:
LF

Posted Apr 07, 2019 at 09:00am
Christy, Carly, & Salcido Family, You are in our thoughts and prayers during this most difficult time. Sending you love and strength.

Flowers were purchased for the family of Manuel Salcido . Send Flowers 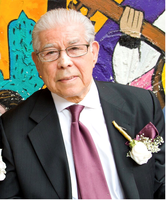 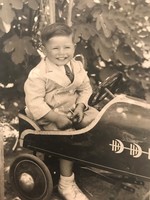