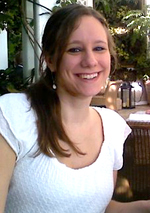 Michal Marie Mann, was born on May 17, 1983, along with her twin sister Morgan, in Mason City, Iowa. Both were welcomed, as a true blessing, into the family of Paul and Tommie Mann, where they grew and were cherished by their parents, extended family and friends.

From a young age, Michal was extremely creative. She was a talented and gifted artist, musician, and performer. She enjoyed entertaining and enriching the lives of those around her whether on stage or behind the scenes. She graduated with honors from Lincoln High School, Wisconsin Rapids in 2002, where she nurtured her love for theatre and music with the highlight being the opening of the Performing Arts Center.

She graduated from the University of Minnesota, Twin Cities, MN with a degree in Theatre Arts, emphasis on Costume Design. Her time at the Santa Fe Opera led to a position with Cirque du Soleil in Las Vegas, as a wardrobe technician on the show “O”. She considered costume design her ultimate professional goal. There she recognized the strengths and talents of those around her and was compassionate about the lives of those who touched her. After that, she expanded her life experiences with a move to Los Angeles where she worked in closed captioning for films and tv, serving the deaf and hard of hearing community.

Michal struggled, at times, to recognize her own gifts, but demonstrated a great internal strength to perfect her talents and relationships. Those who considered Michal a friend were lucky enough to glimpse what a special person she was, as she often covered her own “light”. Spending time with her sister was her greatest joy and the twin bond they shared was very deep. The sound of her laughter will be greatly missed by all who had the opportunity to know it.

Michal passed away at Northridge Hospital in Los Angeles, California on Tuesday, December 3, 2019. She was surrounded and supported, as always, by Morgan- her best friend, soul mate, and sister, as well as her loving parents and dear friend, Mychelle Aguilar.

Michal is survived by her parents, Paul and Tommie Mann, Mason City, IA (formerly of Wisconsin Rapids, WI), her sister, Morgan Mann of Los Angeles, CA, her grandmother, Pauline Mann, Burlington, WI, aunts and uncles-Jay Turvold, George Mann (Jayne), Gary Mann (Valerie) and numerous very special cousins. Preceding her in death were grandparents, Gaylord and Verla Turvold, and George Mann, all of whom had a great impact on her young life, and an uncle, Steven Mann.

Arrangements are being finalized for services. In lieu of flowers, we would like you to consider donating to: